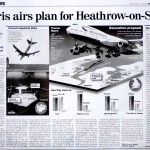 Boris Johnson, the Tories’ London mayoral candidate, announced this weekend that Heathrow was a “planning error” and ministers should consider phasing it out, instead of pressing ahead with a third runway – and a possible sixth terminal.

His intervention comes as campaigners claiming to represent 2m people under the flightpath seek to block the expansion plans.   They plan a legal challenge on the grounds that the consultation, which closes at the end of this month, is not valid.

Lawyers are examining evidence that the Department for Transport failed to include research predicting a third runway would cause excessive nitrogen dioxide emissions.

Johnson is calling on the government to re-examine plans for a new airport on artificial islands in the Thames estuary, where planes could take off and land round the clock without disrupting residents. “If you look at what is going on in other countries around the world, in Hong Kong, in Washington – it’s not impossible to move the capital’s biggest airport,” he said.

“What we don’t want to do is entrench a planning error of the 1960s by further expansion at Heathrow.   We should look at whether there’s a solution to the east, in the Thames estuary.”

Heathrow began life as a fighter airfield in 1943, on the west side of London to shelter it from Luftwaffe attacks.   Since then it has grown into Britain’s biggest airport, but because it is only 15 miles from the centre of London, most of the 477,000 flights a year fly in over the capital to land. Campaigners are concerned that the addition of a third runway, which would see the number of flights rise to up to 702,000 a year, will increase noise pollution and the risk of an accident over the capital.

Edward Lister, of the 2M Group that represents 12 local authorities under the Heathrow flightpath, said: “It’s a daft place for an airport. The more flights there are, the more the risk of an accident in the most densely populated part of the country.”

Since the 1960s, 13 major cities including Paris, Milan and New York have moved their airports further out. In Hong Kong, the government spent six years and $20 billion building an airport on an artificial island and linking it by bullet train to the city.

In Britain, however, similar proposals have repeatedly been blocked. In the 1970s a scheme to build an airport on Maplin Sands near Southend-on-Sea in Essex was abandoned because of a shortage of public funds.

In 2005 the government rejected four options to build airports in the estuary on the grounds of cost, environmental damage and the risk of a plane being downed by a birdstrike. It approved the expansion of Heathrow, Gatwick and Stansted instead after lobbying by BAA, the airport operator, and airlines.

Officials estimate that building a third runway at Heathrow will cost  £13 billion as the government attempts to meet European Union targets on noise and emissions. Proposals for new airports either floating in the Thames estuary or on the coastline were costed at  £7.6- £13.9 billion.

Sir Peter Hall, president of the Town and Country Planning Association, believes it is time to “retire” Heathrow and build a new airport to the east of the capital. “If you located an aircraft properly in the Thames estuary virtually all the flight movements would be over the North Sea. There would be no constraints on development at all,” he said.

Among the schemes rejected in 2005 was Thames Reach, an airport devised by a London firm of architects. According to the plans, it would have been built on reclaimed land in the Thames estuary near Cliffe in Kent and Canvey Island in Essex, at a total cost of  £11 billion.

Mark Willingale, partner of Bluebase, the architectural practice behind the plans, said: “It’s a terrific opportunity. You’ve got a combination of 116,000 new homes in the Thames Gateway with new roads and rails to serve them, the location is ideal for an airport. We just wish the government had the vision to see it .”

The transport department said it has no plans to reconsider its veto on the estuary. Lord Soley, director of Future Heathrow, a pro-expansion group, said: “If you build a new hub airport you don’t need Heathrow so what do you do, close it down? We’re talking 72,000 jobs on the airport alone. It is unrealistic.”