Environmental Hoo-ha From concept to reality 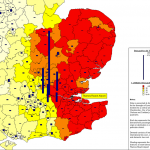 The White Paper ‘The Future of Air Transport’, published on 16 December 2003, sets out a strategic framework for the development of airport capacity in the United Kingdom over the next 30 years, against the wider context of the air transport sector.

It does not itself authorise or preclude any particular development, but sets out a policy framework which will inform decisions on future planning applications, and against which the relevant public bodies, airport operators and airlines can plan ahead. It sets out the conclusions of the Government, and of the devolved administrations where appropriate, on the case for future expansion at airports across the country. In doing so, it takes account of all relevant factors, including views expressed in an extensive consultation exercise which attracted over 500,000 responses.

Alternative proposals
11.106 In the second edition of the consultation document and elsewhere the Government made clear it was open to, and would consider, any serious and worked-up alternative ideas. The following proposals were considered:

11.114 Although the Thames Reach promoters managed to mitigate some of the drawbacks of Cliffe, a substantial part of the airport site would impact, as did Cliffe, on areas of very high ecological value that are protected under the EC Habitats Directive, and we have doubts whether the passenger numbers envisaged could be handled within the land-take given the likely demand for air travel over the day. We were concerned that the surface access proposals were not robust and over-dependent on rail. In the light of the appraisal of the Cliffe option, there remain significant concerns about the risk of bird strike and the efficacy of the measures proposed to address it. The capital costs assumed by the promoters are much less than those for Cliffe, including for surface access.