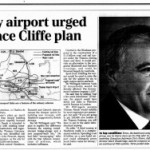 Plans for a £6.5 billion Thames Reach Airport in Kent will be presented today to a cross-party group of MPs by Bluebase, a London firm of architects.

Mark Willingale, partner at the Bluebase practice, believes the Thames Reach proposal is vastly superior to the Government’s fledgling plans for an aviation hub at Cliffe, Kent. He argues that it should be adopted in Cliffe’s place in the Government’s south-east airports study.

While the Cliffe option is on land, Thames Reach airport would be nearer to Cliffe village but in the estuary, and closer to existing road and rail links. Planned to be built in phases, the new airport would initially be a Gatwick-size operation handling about 23m passengers a year.

A second phase could expand the airport to 110m passengers annually with 24-hour operations, and up to three runways. There would be further scope to develop a hub airport competing with Schipol, Amsterdam, or Charles de Gaulle, Paris.

Bluebase’s plans go much further than simply building new airport capacity because Thames Reach is intended to integrate with existing transport infrastructure and regenerate the Thames Gateway. The area was identified last week by John Prescott, deputy prime minister, as the site for at least 200,000 new homes.

But Mr Willingale said: “We plan to explain the difference between the existing vested-interest bodge-alongs and a new purpose-built site.” He had held “encouraging” talks with the Star Alliance consortium of airlines, which includes Lufthansa.

Central to the Bluebase proposal is the construction of a £1.5 billion road and rail tunnel under the Thames, linking Essex and Kent. It would provide an alternative to the congested Blackwall and Dartford crossings, and could be financed largely by road tolls.

Spoil from building the tunnel would be used to raise the site for the airport by six to eight metres above sea level.

Mr Willingale believes “only 20 households would be directly affected. The Government’s scheme impacts 1,100”. He said that by adding “just a few extra kilometres” of railway, the airport would have direct rail links to Waterloo and St Pancras in London.

Mr Willingale accepts Thames Reach would initially be more expensive per passenger, but said: “If you are going to put 200,000 new homes in the Thames Gateway, you will have to put in the same infrastructure anyway.

“A third runway at Heathrow really is a compromised solution. Spending a net £5 billion on a new-build airport could ultimately prove much better value for money.”